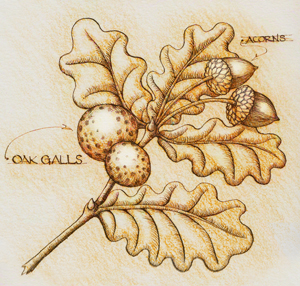 It is said that this recipe is on record at the Public Record Office in London. The calligrapher and scholar Patricia Lovett has found that in making ink like this one can add a preservative such as phenol to prevent the growth of mould. From Patricia Lovett's book Calligraphy and Illumination.

Oak gall or Oak apple are the common names for a large, round, vaguely apple like gall easily found on oaks. Oak galls vary in size from 2/5" to 2" in diameter. They are caused by chemicals injected by the larvae of certain kinds of wasps. Oak Galls have been used in ink recipes since the Roman Empire era or earlier. Oak galls boiled in water made the gallic or tannic acid needed to give the ink a bite to grab onto the quill and the paper, however, would likely corrode over time and destroy the areas of the document that the ink was in. Thus the first invisible ink (joking). Actually, the very ancient documents written in oak gall ink often have paper missing where the lettering was.